Happy Feast of Saint Gemma! Today the Scala Santa in Rome will be uncovered for pilgrims to ascend directly upon the steps of marble which Our Lord was condemned to death on. I am going tomorrow morning and invite you to send your intentions for me to take with me: find out more here.

The soldiers, tired from making sport of the chained Christ, took some rest, but the bruised, besmirched, disheveled Savior stood in the chill of the early dawn. As the sun was rising, the chief priests, the Scribes, and the whole Sanhedrin held a secret meeting. Strange, isn’t it, how willing and easy men rise to do evil, while the doing of good seems so irksome? The sacred writers do not relate what took place at that meeting except to say that they “took counsel together against Jesus in order to put Him to death.” (Mt. 27:1)

The secret meeting was soon concluded and a public session was instigated. Try to imagine the scene. See Christ in His deplorable state being dragged into the large meeting room. See Him meet every glance with a searching look. He was God, and, as God, knew what had transpired at the secret session and He could read too, the hearts of His enemies. Why would they bother to go through the formalities of a second investigation, since, certainly, they were not searching for the truth? They had already taken “counsel together” against Him, “in order to put Him to death.”

It was because Christ knew their thoughts that He said in reply to the question: “If thou art the Christ, tell us?” “If I tell you, you will not believe me; and if I question you, you will not answer me or let me go. But henceforth, the Son of Man will be seated at the right hand of the power of God.” And they all said: “Art thou, then, the Son of God?” He answered, “You yourselves say that I am”; and they said: “What further need have we of witness? For we have heard it ourselves from his own mouth.” (Lk. 22:66-71) “And they bound him and led him away, and delivered him to Pontius Pilate the procurator.” (Mt. 27: 2) 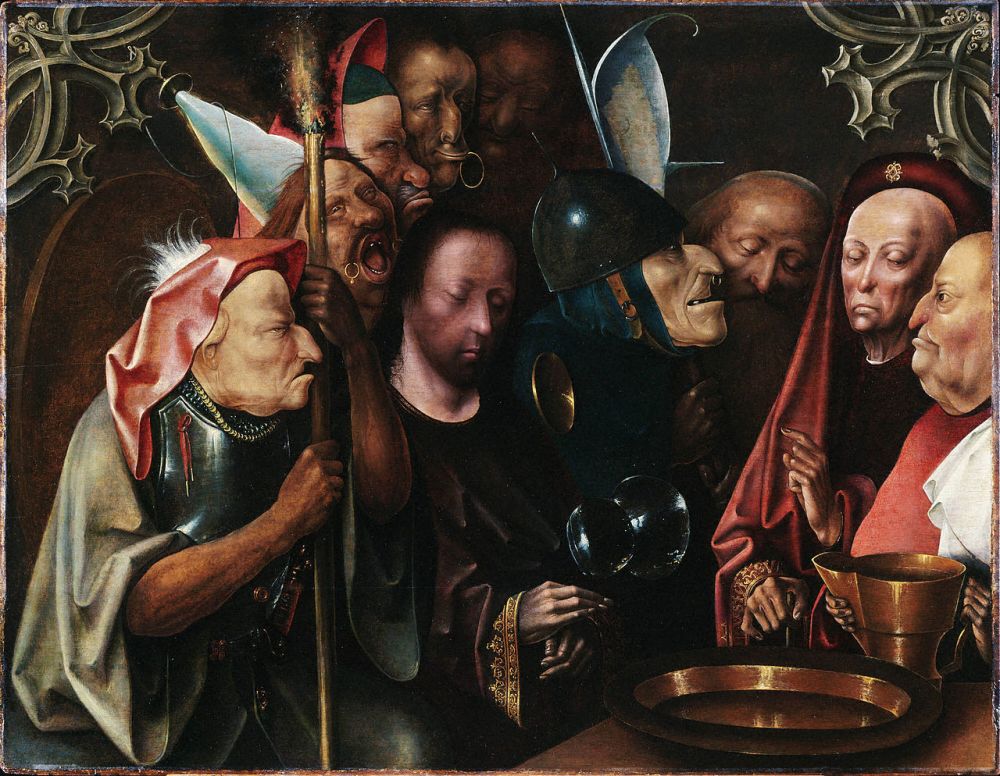 When Caiphas put that loaded question directly to Christ: “Tell us, art thou the Christ?” Our Lord replied in kind.

Remembering what abuse He had suffered when that question had been asked for the first meeting of the Sanhedrin a few hours earlier, our Lord said: “If I tell you, you will not believe me, and if I question you, you will not answer me, or let me go.” Here the Master was clearly referring to the prophecies of the Old Testament regarding the Messias, which they, as scholars and teachers, were supposed to know well, and which, if they would only open their eyes, could see clearly were fulfilled and verified in Him. The high priest and the Sanhedrin had but one single thought and that was not the fulfillment of the prophecies but the destruction of Christ. The merciful Christ in an endeavor to impress His enemies with the salutatory fear of the consequences of their unjust action, added as He did at His first trial – “you shall see the Son of Man sitting on the right hand of the power of God,” alluding clearly to the final judgment of all men, where true justice would prevail.

How often have we not all heard the Ten Commandments, listened to sermons, read books, studied Christ’s counsels and with our hearts set on sinning, closed our mind and conscience to the voice of God pleading with us to keep His law. How often may some of us prayed half in earnest to know our vocation, to which prayer Christ could say in answer: “If I shall tell you, you will not believe me, and if I question you, you will not answer me?”

Will you not go to Christ in His tabernacle today, and appease His wounded heart for all the indignities heaped upon Him before Caiphas and the Sanhedrin? Tell Him how ready you are to do His will in all things.

See how you can spread devotion to the Passion by assisting in the campaign to provide my publication of meditations on the Passion written by a Passionist priest for novices. May this little effort of ours bear much fruit in the reform of the Church, starting with our own souls and the souls of as many future priests we can reach! Find more information out at the BOOKS4SEMS campaign.

*From Reflections on the Passion by Father Doyle