Skip to content
Posted on November 6, 2017 by passioxp
Its difficult at times to look at the Crucifixion in the below terms, because we often think about ourselves or we poeticize the dynamism of Calvary. Use the following for a short meditation before you go to bed this evening.
From a blog I occasionally look at (posted with permission of the author):
The most “irreverent” Mass in history was Calvary itself. No one was actually paying attention to the Sacrifice of the Lamb except the small cohort led by The Blessed Virgin, St. John and St. Mary Magdalen. Only they assisted in silence. What else was going on at Calvary? People were walking around, talking, ignoring Our Lord at best, laughing, shouting and heckling Him at worst. One of the major aspects of crucifixion was the fact that the crucified were naked, completely exposed and obviously unable to cover themselves in any way – complete humiliation. Can you imagine the taunts and filth that the Roman soldiers hurled at Our Lord? Don’t kid yourselves, folks. They were probably making sexual taunts at Him that would turn even our jaded stomachs. That is, of course, when they weren’t playing dice. The Jewish priests also came to mock and scorn. And there were probably quite a few people who came just to gawk. They had no idea what they were looking at other than three men being tortured to death. They just gawked at the spectacle, then walked away.
Now consider the Apostles. None except St. John were there. Can you imagine the regret that they all felt for the rest of their lives for not having been there? It was the most important event in history, in fact, it was the central event in all of history – so central that everything before and everything after is and will be reconciled through the central point of Calvary. And they missed it. They freely chose to stay away, cowering in hiding. 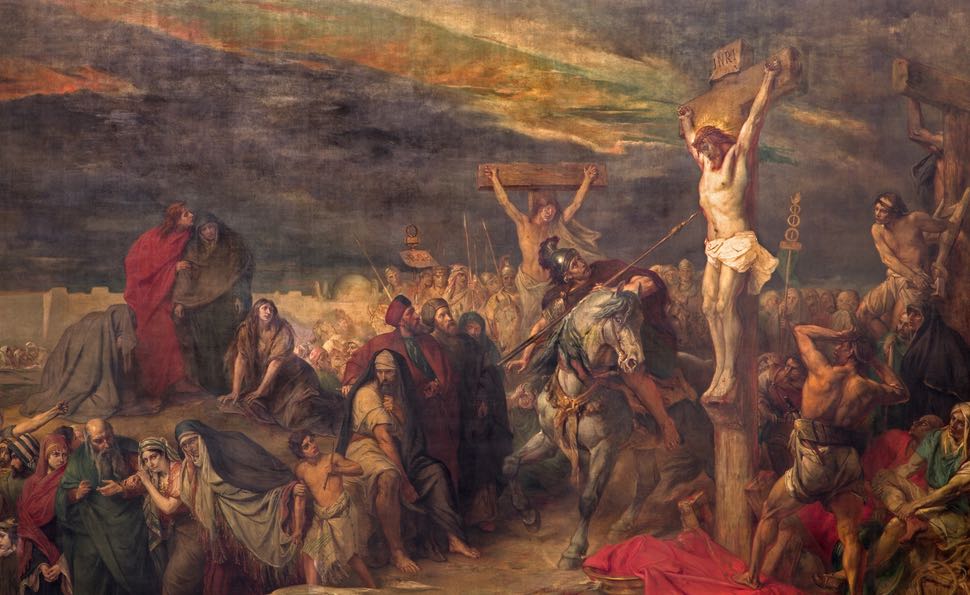