Any valid Mass is a renewal of the Sacrifice of the Cross, which is of infinite value, and therefore as long as a Mass is valid it, too, is of infinite worth, and hence equally efficacious for those who participate. This would be considering the intrinsic value of the Mass.

In considering all the fruits of the Mass, we must distinguish between the intrinsic value and the extrinsic value. Since the Mass is essentially identical to the Sacrifice of Christ, the Primary Sacrificial Priest, on Calvary, which was itself of infinite worth, the intrinsic value of any Mass is infinite.

“[T]he case is different when the Eucharistic Sacrifice is considered in its relation to man. From this point of view it aims at procuring our salvation and sanctification, and is, consequently, a means of grace, or rather a source of grace, bringing us the riches of heavenly blessings…The fruits which the Sacrifice of the Mass obtains for us from God are only finite, that is, restricted to a certain number and determining measure… The Sacrifice of the Mass, therefore, with respect to man can have only a restricted efficacy, and in its fruits is capable of only limited application.” (The Holy Sacrifice of the Mass, Gihr, ch. 3, art. 2, sect. 17, p. 137-138)

This limited efficacy “does not lie in the essence or value of the Sacrifice, since it possesses infinite power for producing every effect”. Rather, “the final and decisive reason for the more or less plentiful application of the sacrificial graces is the will of Christ, in other words, is to be sought in the positive ordinance of God”. That is, while the Mass itself is an infinite source of grace, when it comes to “the distribution of His gifts, God requires our cooperation.” (Ibid., p. 138-139)

The fruits of the Mass, that is, the consideration of the grace received by individuals, derive from four factors:

The last three points are external factors which affect the amount of grace a person receives, in such a way, that the devout hearing of one mass can derive greater fruits than an equally devout hearing of another mass.

The Holiness of the Church

One factor determining the efficacy of the Mass is the general holiness of the Church in its members at a given time, including the bishops and reigning pope. Regarding this point, the Catholic Encyclopedia says “the greatness and extent of this ecclesiastical service is dependent on the greater or less holiness of the reigning pope, the bishops, and the clergy throughout the world, and for this reason in times of ecclesiastical decay and laxity of morals (especially at the papal court and among the episcopate) the fruits of the Mass, resulting from the sacrificial activity of the Church, might under certain circumstances easily be very small.” (<http://home.newadvent.org/cathen/10006a.htm&gt;, accessed 11 January 2017)

“But since the holiness of the Church consists in the sanctity of her members, it is not always and invariably the same, but greater at one period than another; therefore, the Sacrifice of the Church is also at one time in a greater, at another in a lesser degree pleasing to God and beneficial to man.” (Gihr, ch. 3, art. 2, sect. 17, p. 144)

This factor effects the Church as a whole, for it is based upon the moral condition of the Church. The effect then will be equal for all Masses offered at a given time in history. Following, in considering the Priest and the Ritual, it will be seen how these factors are specific circumstances and thus have a direct effect on the efficacy of individual Masses.

St. Thomas teaches that the fruits to be derived from a particular Mass are based, in part, on the holiness of the priest celebrant who intercedes for the faithful, “and in this respect there is no doubt but that the Mass of the better priest is the more fruitful.” ST III, Q. 82, art. 6, res.)

A Mass celebrated irreverently by an unworthy priest, or worse still, by one who violates the rubrics, will be less efficacious, and therefore produce fewer fruits than a one celebrated by a holy priest who says Mass with devotion and follows the rubrics with precision.

The following explains in a way that cannot be ignored or disputed, if we would only considering the action of the priest, as just that, a moral action:

“The more holy and pleasing to God a priest is, the more acceptable are his prayers and oblations; and the greater his devotion, the greater the benefit to be derived from his Mass. For just as other good works performed by a pious man gain merit in proportion to the zeal and devotion with which they are performed, so Holy Mass is more or less profitable both to the priest who says it and to the persons for whom it is said, according as it is celebrated with more or less fervor”. (quoting a Cardinal Bona, d. 1674, Explanation of the Holy Sacrifice of the Mass, Rev. Martinus von Cochem, O.S.F., p. 285)

The degree of external glory the ritual gives to God effects the efficacy of the Mass, as well. In this respect, not all Rites of the Church are equal; neither does a low Mass have the same efficacy as a High Mass. On this point, Fr. Gihr says:

“The Church not only offers the Sacrifice, but she moreover unites with its offering various prayers and ceremonies. The sacrificial rites are carried out in the name of the Church and, therefore, powerfully move God to impart His favors and extend His bounty to the living and the dead. By reason of the variety of the formulas of the Mass, the impetratory efficacy of the Sacrifice can be increased… also the nature of the prayers of the Mass and even of its whole rite exerts accordingly an influence upon the measure and nature of the fruits of the Sacrifice. From what has been said there follow several interesting consequences. Among others, that, on the part of the Church, a High Mass solemnly celebrated has greater value and efficacy than merely a low Mass…At a Solemn High Mass the external display is richer and more brilliant than at a low Mass; for at a solemn celebration the Church, in order to elevate the dignity of the Sacrifice, manifests greater pomp, and God is more glorified thereby…This grander and more solemn celebration of the Sacrifice is more acceptable to God and, therefore, more calculated to prevail upon Him to grant us, in His mercy, the favors we implore; – that is, to impart greater efficacy to the petitions and supplications of the Church.” (Gihr, ch. 3, art. 2, sect. 17, p. 144-145)

In addition, the celebration of such exalted rituals demands a certain decorum fitting of the majesty and the exalted nature of the Holy Sacrifice of the Mass. Lacking in respect to such demand, the extrinsic merit of a particular Mass would be affected. Simply put, ugly things please God less, and, thus, the merit to be gained in offering such things to God is less.

On Calvary, our Lord offered His Passion and Death to the Father in order to merit our salvation. At the Mass, we, being present at Calvary, are offered by Jesus Christ to the Father and the fruits of His Passion become open to us. The infinite Font of Grace, The Holy Sacrifice of the Mass, is the greatest gift given to us. It is there that we encounter the love of Christ most intimately. It is there that we can seek the graces needed in the vale of tears. Are we attentive to this? 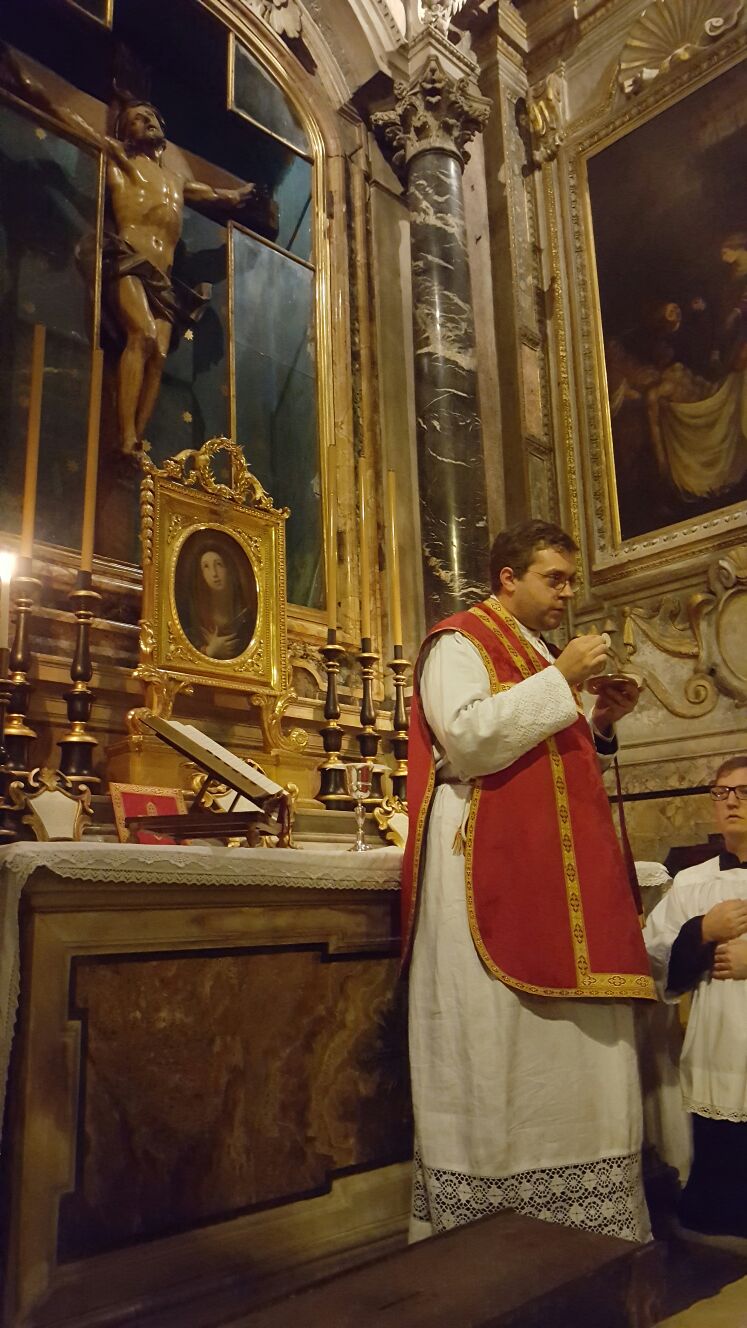 As shown, the fruits of the Mass are finite in their application, and contingent on many factors. The holiness of the priest, and the manner in which he says the Mass, will affect the fruits of the Mass. The greater the solemnity and grandeur of the Mass, the greater will be the graces God pours out on those who assist. The problem so rampant these days in the Church, is that we do not consider these points when we approach a particular Mass. If we would consider these points, would we reconsider where and how we attend the Holy Mass?

Let the words of Saint John Vianney inspire us:

If we knew the value of the Mass, we would die!